We’re well into the new year now and after President Trump’s inauguration on Friday past I thought it might be useful to reflect on the past year. 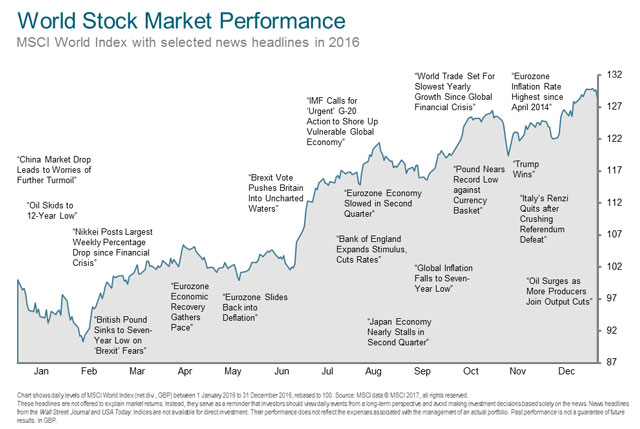 In 2016, the UK market reached new highs and stocks in a majority of developed and emerging market countries delivered positive returns. UK investors with overseas assets benefited from the decline of the value of the pound, with Sterling falling 16% against the US dollar.
The year began with anxiety over China’s stock market and economy, falling oil prices, concern about the impact of the strong yen on the Japanese economy and uncertainty around the impact of the UK’s EU referendum. Many world equity markets were in steep decline for the first few weeks of the year. In spite of this shaky start, many markets ended the year close to (or breaking) all-time highs. Many of you will remember the UK press strongly advising investors to sell all stock market holdings on the advice of one of the big banks. Thankfully none of you did that – imagine the losses suffered by anyone who did that…
Many investors may not have expected global stocks and bonds to deliver positive returns in such a tumultuous year. This turnaround story highlights the importance of diversifying across asset groups and regional markets, as well as staying disciplined despite uncertainty. Although not all asset classes had positive returns, a globally diversified, cap-weighted portfolio logged attractive returns in 2016.
Investors are well served by staying the course with an asset allocation that reflects their needs, risk preferences and objectives. This can help investors weather uncertainty in all of its forms.
Returns from individual countries were typically varied. Among developed markets, Canada performed the best (+48.6%), while Israel performed worst (-10.3%). In emerging markets, Brazil performed the best (+98.2%) and Greece the worst (4.82%).
Brazil is a noteworthy example of how difficult it is to predict market returns and time markets. The country is currently experiencing political and economic distress—the OECD predicted that its domestic output would contract 3.4% in 2016—yet its stock market returned 38.9% last year in local currency terms.
2016 in Context 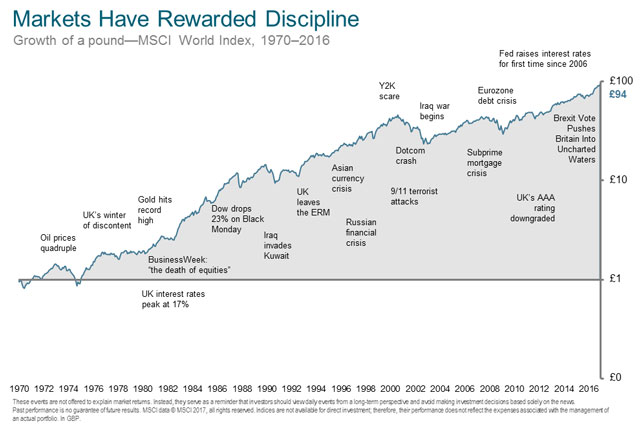 Global equity markets have enjoyed strong returns since the financial crisis of 2008–09, and many times in the past few years, people have speculated about what might halt the rise of global equity markets. Several events occurred in 2016 that were suggested as potential catalysts for markets to decline. However, a globally diversified, cap-weighted portfolio delivered positive returns in 2016.
The chart above puts 2016’s return in a long-term context. It illustrates that investors have enjoyed positive long-term returns throughout the 1970s crisis, Black Monday, Black Wednesday, wars, currency crises, bubbles and crashes. 2016 adds to that list with Brexit and the US presidential elections. This shows that, rather than making investment decisions based on headline news, investors are better served by following a disciplined approach to investing, based on a long-term financial plan that reflects their individual needs, risk preferences and objectives.
Well done if you’ve made it this far! On a lighter note check out this youtube clip which shows Trump quoting word for word part of a speech given by Bane, the last Batman villain.
Funny in one way, frightening in another!

PLEASE NOTE THE ARTICLES POSTED ON GIBSONEWS DO NOT CONSTITUTE ADVICE

We contribute regularly to a number of key publications throughout the UK and Ireland.